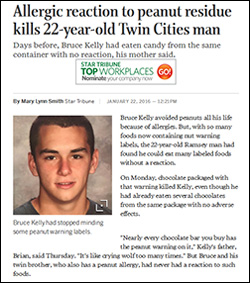 Every time I see a headline about another fatal or near-fatal allergic reaction to food, it makes me sad. Then it makes me angry.

With food allergy on the rise in the U.S., more food allergic people, and parents of food allergic children, have raised a red flag and demanded better answers and solutions.

As a parent of a food allergic child, I feel their pain. My own son had a life-threatening reaction to egg as an infant. I got the response that so many parents do from my provider — avoid the food. And so we did, for several years, until it seemed safe again. Though we didn’t see another anaphylactic reaction, we did start seeing other telltale signs of the atopic march — eczema, persistent rhinitis, allergic shiners, and gastrointestinal issues. Around that time, I met Dr. David Morris and his daughter, Dr. Mary Morris, while working with them on a business project through Allergy Associates of La Crosse.

It was the first time that, as a parent, I was told that there was more that could be done beyond avoidance and an unending supply of (temporary) symptom relieving meds. Drs. Morris told me we could try treating the underlying allergy using what was then a relatively unknown treatment option — sublingual immunotherapy — or allergy drops under the tongue.

That conversation led to two important steps in my family’s lives — going to work for the doctors through the formation of Allergychoices, whose mission is to let more doctors and patients know about treatment options. And equally important, it led to my son getting allergy treatment for his food and environmental allergies that actually modified the disease — not just temporary symptom relief.

Through my own experience, and in talking with a myriad of providers and patients who weren’t satisfied with avoidance as the only treatment option, it became apparent that we have a long way to go in reaching those most at risk. Through Allergychoices, we have an opportunity to talk with providers every day who are frustrated with patients not getting better, seeking information about the treatment, and how to implement the La Crosse Method™ Protocol developed by the doctors at Allergy Associates of La Crosse. And we hear from patients who have tried most every treatment under the sun with no luck until their doctor looked at allergy drops.

Which brings me back to food allergy. In recent years, there has been more research noting that allergy drops are a viable option for treating the cause of allergic disease associated with environmental allergens. Now, we are starting to see studies address sublingual immunotherapy for food.

A few blogs back, we featured news about Dr. Mary Morris’s current peanut study. Though the study is in its early stages, it showed a few important things. Patients in the study were compliant with allergy drop treatment (92% reported daily compliance). It suggested that most food allergic patients under treatment also have other allergies, and that by treating both simultaneously, other symptoms and related diseases such as asthma and atopic dermatitis can improve. And for those who try to live life by avoiding their allergens but live in fear of accidental exposure – it showed that of the roughly third of the treatment subjects who had accidentally ingested peanut (as we all know can easily happen) – only 13.6% of those required epinephrine, and none required hospitalization or ICU admissions.

So as I see another headline about a young man who lost his life from a peanut allergy, I am sad and heartsick for his family. I’m still angry, and frustrated that this happened again. But I’m also hopeful knowing that there are more answers, more providers who are looking at sublingual immunotherapy for both environmental and food allergies, and more patients who, like my son, may not have to live in fear or hide from the things that they most enjoy in life.

If you’re a provider interested in learning more about what you can do, we’d love to hear from you.