Eczema, also known as atopic dermatitis or atopy, is a common, often chronic skin disease that affects 10-20% of the U.S. population. It is commonly considered as a type of skin allergy or sensitivity. 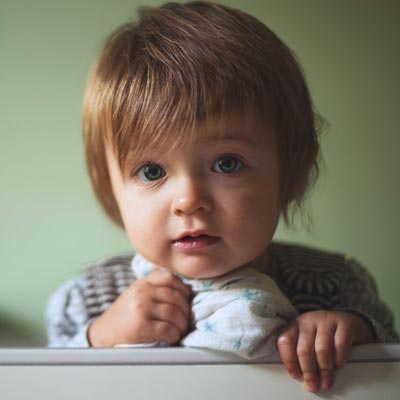 Symptoms vary, but may include:

Although atopic dermatitis can occur at any age, it most often affects infants and young children. Untreated, it can remain a life-long condition and often progresses into other diseases.

This progression is sometimes referred to as atopic march, which may last into adulthood or appear later in life. The atopic march predicts that patients with a strong allergic component to their atopic dermatitis will typically develop some or all of the following conditions:

How can allergy drops help with eczema?

Identifying allergies in the context of atopic dermatitis is important not only for treating the disease, but early treatment with immunotherapy — both allergy drops and shots — has been shown to alter the atopic march.

Allergic asthma, in particular, responds especially well to sublingual immunotherapy. Research suggests it can be prevented in many children when immunotherapy begins with an early atopic dermatitis/allergy diagnosis.

Want to find a provider near you who offers custom sublingual immunotherapy?

Could Your Heartburn & Reflux Symptoms be Allergy?

How Early Eczema Treatment May Help Slow the Allergic March

What to Know About Personalized Sublingual Immunotherapy

The Rundown on Peanut Allergy

Are You Missing the Allergic Connection? Look Below the Surface

What is sublingual immunotherapy? Expand

Sublingual immunotherapy, often called allergy drops, works like allergy shots by gradually helping your body build tolerance to the antigens or substance(s) that cause your allergies. The difference is that the antigen is placed under your tongue in a customized liquid form. See how allergy drops work.

What is an antigen? Expand

An antigen is an allergy-causing substance such as pollen, mold, pet danders, and specific foods such as dairy, peanuts, fish, wheat, corn, and eggs, among many others.

How do I know I am getting treatment customized for me? Expand

At Allergychoices, we advocate for custom sublingual immunotherapy that is based on your specific allergens, and at your level of sensitivity — matching your allergic fingerprint. The La Crosse Method™ Protocol follows this philosophy. Treatment is matched to your test results, and gradually becomes stronger based on how you respond to treatment — it does not follow a “one size fits all” formula that doesn’t take your individual response, lifestyle, and medical history into account. This precise approach helps ensure your treatment isn’t higher or lower than needed for your body to respond. You can ask your provider if their approach follows this philosophy of treatment to be sure it is customized for you.

What kind of allergies can be treated with allergy drops? Expand

One of the benefits of sublingual immunotherapy is that it can treat a broad range of allergies, including those caused by:

Who should take allergy drops? Expand

Anyone interested in treating the cause of their allergic disease, instead of just temporarily managing symptoms, can consider allergy drops. Although most allergy sufferers can benefit from allergy drops, they’re especially ideal for people who can’t tolerate or don’t respond to allergy shots, as well as those who are unable to commit to other therapies and long-term medication use. These people include:

* Allergy drops have proven especially helpful for children with eczema and recurrent ear infections, which often have underlying allergic causes. Research shows that many children with untreated eczema and allergies often develop asthma and other chronic conditions later in life, so treating them early can have life-long benefits and may prevent development of other allergies and asthma.

Where can I get allergy drops? Expand

More providers across the country are beginning to offer allergy drops to their patients. If you’re interested in finding someone close to you, we can help you find a provider nearby who is trained in offering custom sublingual immunotherapy. Or, we’re happy to assist providers in adding this option.

Can I order allergy drops from you? Expand

Allergy drops are prescriptions, so a licensed prescriber must order and will monitor your treatment progress and dose based on your progress. Contact your provider to order your prescription, or we can help you find a provider who offers treatment using the La Crosse Method Protocol.

What are the advantages of allergy drops? Expand

In addition to being a viable option for people of all ages and conditions, there are more advantages:

Are allergy drops safe? Is there research validating their effectiveness? Expand

Allergy drops have been used around the world for more than 100 years, and numerous studies validate both the safety and effectiveness. The World Health Organization has endorsed sublingual immunotherapy as a viable alternative to allergy shots. The Cochrane Collaboration, the world’s most-trusted international organization dedicated to reviewing healthcare treatments, concluded that allergy drop immunotherapy significantly reduced allergy symptoms and the use of allergy medications.

In addition, La Crosse Method Protocol outcomes have been validated through the Validation Institute, an independent team of population health scientists and bio-statisticians who provide objective review to validate performance in healthcare.

See our bibliography for more information about research studies.

What kind of side effects can I expect from taking allergy drops following the La Crosse Method Protocol? Expand

Most patients do not report side effects, but some may report minor mouth itching or stomach upset—especially when beginning treatment or as prescription strength increases. Most reactions resolve themselves on their own, or with antihistamines. Report symptoms lasting more than an hour to your doctor.

Rarely, generalized reactions may occur, including:

Yes, you can convert from allergy shot to allergy drop treatment. Our clinical team can work with your provider to review your current treatment and adjust your dosing and delivery so you can safely take your treatment at home.

Will my medical insurance cover the costs? Expand

Insurance companies may cover the cost of office visits and diagnostic testing. Because allergy drops are an off-label use of FDA-approved antigens, they are not typically covered by insurance. Check with your carrier first.

Allergy drops do qualify for Health Savings Account or Flex Spending reimbursement. Even without insurance coverage, most patients find treatment affordable and comparable to other medication or visit co-pays. Most patients agree that the temporary investment in allergy drops is well worth the lasting results and improvement in their quality of life.

I’ve heard that allergy drops are not approved by the FDA. Is that safe? Expand

It’s important to understand that the antigens used in allergy drops are the same FDA-approved antigens used in allergy shots. They’re also prepared in the same way as allergy shots. The difference is the route of delivery — a dispenser that delivers a precise drop of antigen under the tongue versus a syringe injecting antigen into tissue. The FDA approves products, not therapies, so it’s unlikely that it will ever “approve” custom, multi-antigen sublingual immunotherapy.

Antigens are labeled by the FDA for single use through injections and some for sublingual immunotherapy. A number of FDA-approved biologics are considered off label use when delivered via sublingual immunotherapy, which is both legal and highly common. Most physicians prescribe drugs in an off-label manner today, for example, the use of blood pressure medications for migraines, montelukasts for COPD, or arthritis drugs to treat shingles. Multiple antigen therapies for both injection and sublingual use are an off-label use of FDA-approved biologics.

Allergy drops are widely accepted as an effective treatment throughout the world. As more U.S. doctors and patients become aware of their benefits, acceptance grows. Allergychoices has proudly led the way in helping more providers and allergy sufferers understand the benefits and options for custom, precise disease-modifying allergy treatment

What are the ingredients in sublingual immunotherapy? Expand

Each prescription is a custom solution for each patient according to the type and severity of his or her allergy. Drop prescriptions contain custom amounts of the allergen the patient is found to be allergic to upon testing. Antigens are put into a glycerin solution for stability. There are no other preservatives added in the prescription formulation.

How long will I need to take my drops? Expand

Most patients take allergy drops three times daily for 3-5 years, but it varies according to the severity of the allergies, seasonality, and how adherent they are to treatment. Many patients see symptoms improve within a few weeks to months, but need to keep using the drops through the full course of therapy to get long-term benefit. For some patients with complex health conditions or severe allergy, treatment length may vary.

Treatment doses are adjusted over time based on your specific test results and response (your allergic fingerprint) rather than a one-size-fits-all treatment approach. This custom way of matching your dose — uniquely to you — helps you build tolerance without unnecessarily increasing your risk of reactions.

How long can I expect the effects of allergy drops to last? Expand

A benefit of immunotherapy (shots and drops), is that it can actually change the course of allergic disease by treating the root cause, not just the symptoms. Once tolerance is built, it can be permanent for many patients.

But even the best treatments won’t work if you don’t stay with them. Like allergy shot treatment, it’s important to stay with allergy drop treatment until your provider has determined it can be discontinued to give you the best chance of long-term effectiveness.

My IgE is not going down; are my allergies getting better? Expand

While many long-term studies of patients on sublingual immunotherapy have shown a decrease in specific IgE in some groups, not everyone’s IgE decreases. It is important to reinforce that IgE is only one measure of allergic response.

Just as IgE can be used to indicate allergic sensitivity, it can also be a late indicator of tolerance to allergens. Immunotherapy induces the regulatory T cell, the immune cell that regulates allergic inflammation. The T cells direct the cells that make immunoglobulin, B-cells, to make protective antibodies such as IgA and IgG4. With all of this immune stimulation, the IgE may actually increase in the first year of sublingual immunotherapy treatment before it decreases. Sometimes a ratio of IgE to IgG4 is used to indicate whether immune tolerance is developing.