Do you ever notice that the sick days at your workplace seem to increase over late summer and early fall? Whether it feels like a nasty cold, sinus infection, or as some would say, the feeling of “getting hit by a truck,” it seems to always sweep through around that time. Chances are that the symptoms are actually from an allergic reaction to ragweed, causing suffering to close to 23 million Americans every year. That is a lot of sick days.

Ragweed is a common, soft-stemmed weed with 17 different species, all ranging in size, height, color and flowering patterns. Though the several species may look slightly different, they are sure to have one thing in common: they produce copious amounts of pollen. Ragweed is short lived, surviving for only one season, but a single plant produces up to 1 billion pollen grains during its life. This specific type of pollen is one of the primary causes of allergic rhinitis in the United States. Of the people who suffer from seasonal allergies, 75% are allergic to ragweed. Who knew a common roadside plant could cause so much misery?

Not only is the plant able to survive in many different environments, the pollen is lightweight and floats easily through the air. Ragweed pollen has been found up to 400 miles into sea and two miles into the atmosphere, proving that even when you don’t see the plant itself, the pollen could be lingering and causing those who are allergic to feel its effects.  The symptoms are variable, but can include things like sneezing, nasal congestion, headaches, eye and throat irritation, and aggravated asthma symptoms. It often disguises itself as a cold, but can last the whole pollination season, ranging from August to November.

Those who suffer from ragweed allergies can have reactions when eating certain foods, too, due to oral allergy syndrome. It’s known that people with pollen allergies can also experience an itchy mouth or throat when eating some fresh fruits and vegetables because of the similar compounds between the pollen grain and the food.  Cantaloupe, banana, zucchini, mango, beans, celery, hazelnuts, potatoes and various other foods can all cause a reaction. Peeling or cooking the fruits and vegetables can make these safer and more enjoyable to eat. 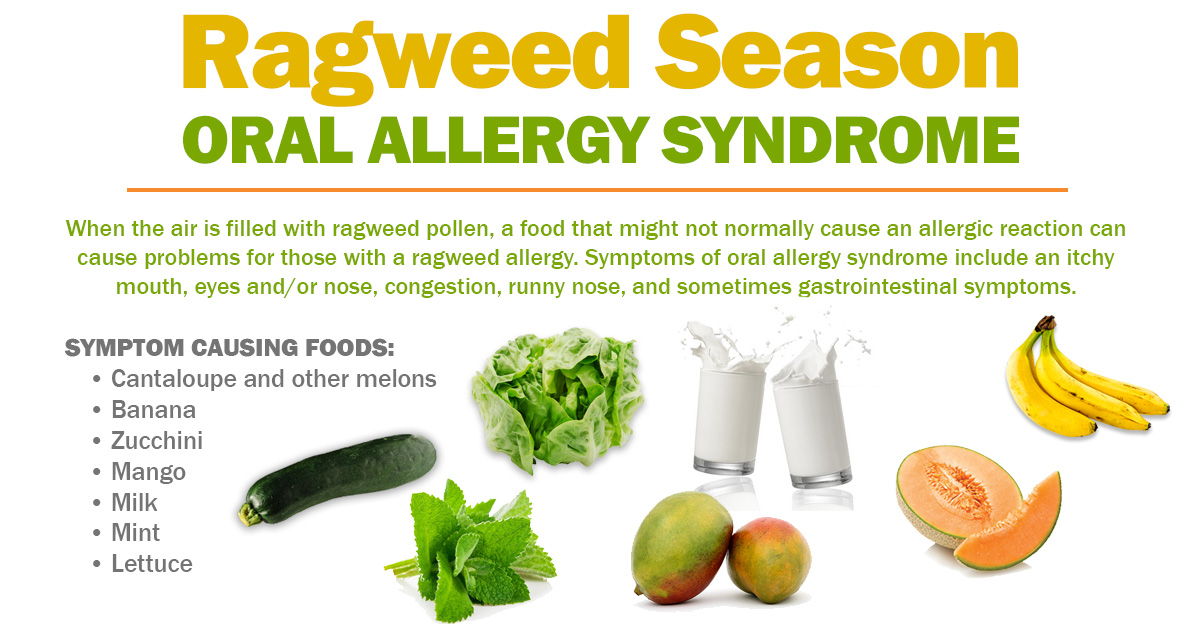 There are ways to manage ragweed season that don’t involve avoiding the outdoors and your favorite summer foods. Mike Kachel, RPh, Allergychoices Pharmacy Director, says that sublingual immunotherapy (allergy drops) can be effective in eliminating the symptoms all together. He explains that those with ragweed allergies are hyper sensitized, so their bodies perceive the allergen as harmful. After using allergy drops for an extended period of time, the patient’s body learns to tolerate ragweed; they recognize it, but don’t react to it. Once the patient is symptom free for a year on maintenance treatment (which typically takes 3-5 years), they are taken off of the drops and typically no longer feel symptoms from the plant.

Preseasonal allergy treatment can be effective in preventing symptoms for those with ragweed allergies as well. Mike explains that preseasonal treatment is a “rush type therapy” where allergy drop doses increase quickly to the environmental exposure dose before the season hits so that the patient’s body becomes used to the allergen. This treatment is best for people who are mono-sensitized or have only one known allergy, and also for those who use yearlong therapy but still show symptoms when ragweed is prevalent.

Mike offers some advice, saying, “don’t wait until it’s in full bloom to start treatment. Whether it’s immunotherapy or an antihistamine or nose spray, do it early.” Resources are available to predict when peak ragweed season will hit, and he explains that beginning treatment before that time can dramatically reduce symptoms. Mike states that most people think seasonal allergies are something that they have to suffer through year after year, but with treatment like sublingual immunotherapy for long-term tolerance, or even antihistamines that are now available over the counter to temporarily reduce symptoms, it’s easy to take control.