If you feel like your seasonal allergies seem to drag on longer and longer each year, you’re not mistaken. According to a study by Ziska et. al that compared the length of ragweed seasons from 1995 to 2015, those who suffer from pollen allergies are indeed suffering longer each year, and there seems to be no sign of it slowing down. 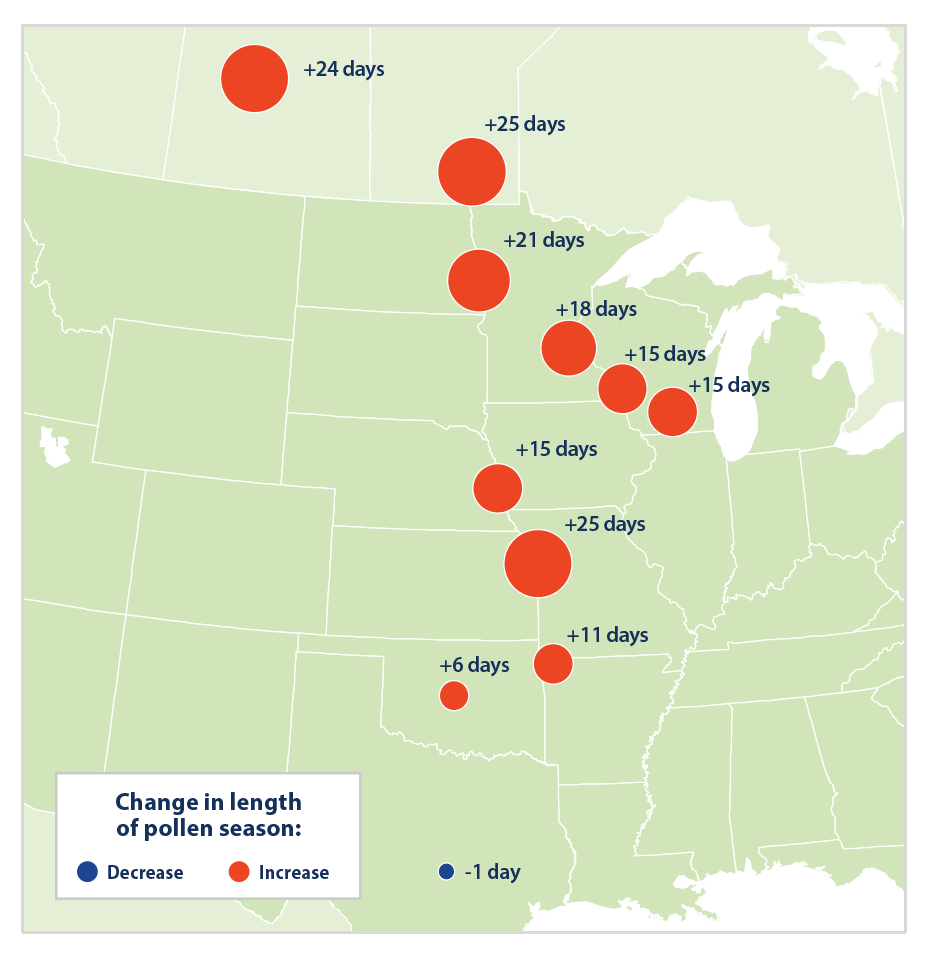 Tony Kavanaugh, medical laboratory technician at Allergy Associates of La Crosse and National Allergy Bureau-certified pollen counter, submitted data to this study to represent La Crosse, Wisconsin. In a previous blog Tony discusses how he gathers his pollen count numbers on top of our roof every morning. He submitted these daily numbers, recorded from 1995 to 2015, to USDA researcher Lewis Ziska who looked at the larger picture and determined La Crosse experiences 15 more days suffering from pollen now than in 1995. There was a similar increase throughout all of the central United States.

Tony was skeptical that the length of ragweed season was increasing because, “ragweed pollen release is triggered when the hours of daylight decrease after the summer solstice and ends with the first frost. The change of 15 days over 20 years was so gradual that I didn’t notice the season was getting longer until Mr. Ziska analyzed the data.” Knowing this information, Tony explains why pollen seems to be increasing and what we can expect knowing of this growth. He says simply, “more carbon dioxide, warmer weather, more plant growth, more pollen.” Let’s dive in.

Increased carbon dioxide in the environment

With talk of global warming, or climate change, you’re sure to have heard that an increase in carbon dioxide in our world is dangerous for the environment in many ways. Surprisingly, it’s good for certain plants. Those plants that produce pollen actually use it as a fertilizer to produce more pollen.

One article explains, “If you’ve looked at a bag or bottle of plant fertilizer, you may have noticed three numbers that represent the ratio of phosphorus, nitrogen, and potassium inside. Different ratios encourage different aspects of a plant’s growth, like flowering or making seeds. Carbon dioxide is also an important nutrient for plants, though it’s not included in fertilizer (because it’s a gas). It turns out that higher carbon dioxide concentrations encourage plants to produce more pollen.”

With an increase of carbon dioxide in our environment, plants are able to produce and spread even more pollen. This graphic from the Allergy & Asthma Foundation of America clearly shows the change. 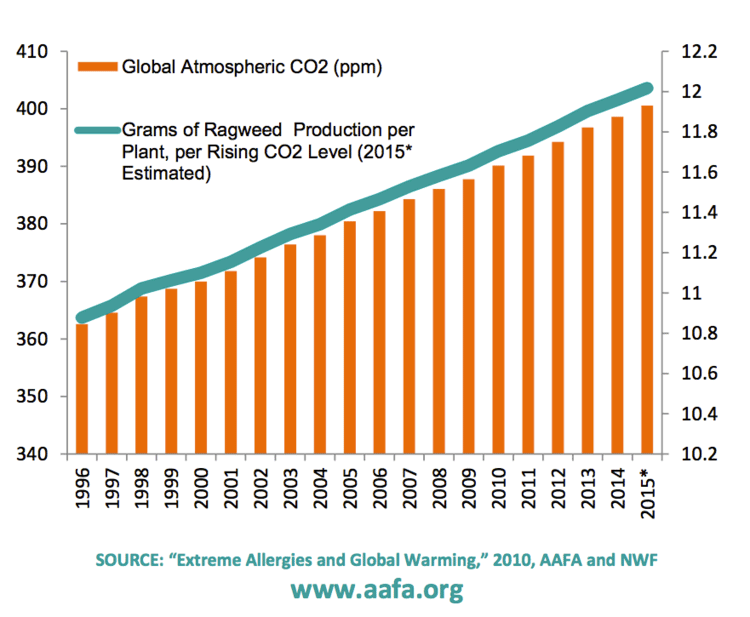 It’s no surprise that pollen producing plants need sunlight to survive – we’ve all learned about photosynthesis. As our planet warms, plants receive an increased amount of sunlight, making growth optimal. This is noticeable in all areas of the country, but it seems to be even more prominent in the far north, where plants are used to limited growth because of cold temperatures and minimal sunlight.

“In Alaska, there weren’t too many trees causing allergic reactions because everything was covered in ice and snow. Now that it’s warmer, the plants can start to grow. It seems to be more extreme up in Alaska,” Tony explains. He finds it interesting that birch trees are becoming increasingly prevalent in Alaska as the “new” climate has actually allowed them to grow. Alaska is now hit with 2,000 to 4,000 grains of birch pollen per cubic meter, where the national average for a high count is 175 grains.

The increase of carbon dioxide and warmer temperatures leads to optimal growing conditions for plants. “More carbon dioxide and warmer temperatures is just better growing conditions for plants. If the plants are getting all the nutrients that they need, then they’re going to grow very healthy and reproduce,” Tony says. “Because ragweed is an annual plant, it is new every year and not dependent upon previous year’s growth to bloom.” These conditions make ragweed fervent, and as carbon dioxide emission increases and the warming of the planet continue, ragweed will continue to grow and pollen will continue to spread and increase. This goes for other pollen-producing plants, too.

In general, Tony says, “Ragweed pollen amounts increase with heavy spring rainfall and a hot dry pollen season. Ragweed pollen decreases if spring does not provide good growing weather or if rain and humidity are too great during the blooming period.”

For those who suffer from pollen allergies, it can be pretty scary – to say the least – knowing that the days of sniffling and sneezing will likely continue to increase year after year. Getting allergy immunotherapy is currently the only way to train your body to not fight back against the pollens inevitably circulating through the air. Sublingual immunotherapy is a convenient, safe, and effective treatment that doesn’t require weekly office visits. Many people can benefit from this innovative treatment. Read through our website and see if it could work to help calm your seasonal allergies.